If non-surgical alternatives are no longer sufficient to reverse troublesome signs of aging like loose, sagging skin in the face and neck, excessive fat, jowls, and deep wrinkles it’s time to consider a surgical approach. 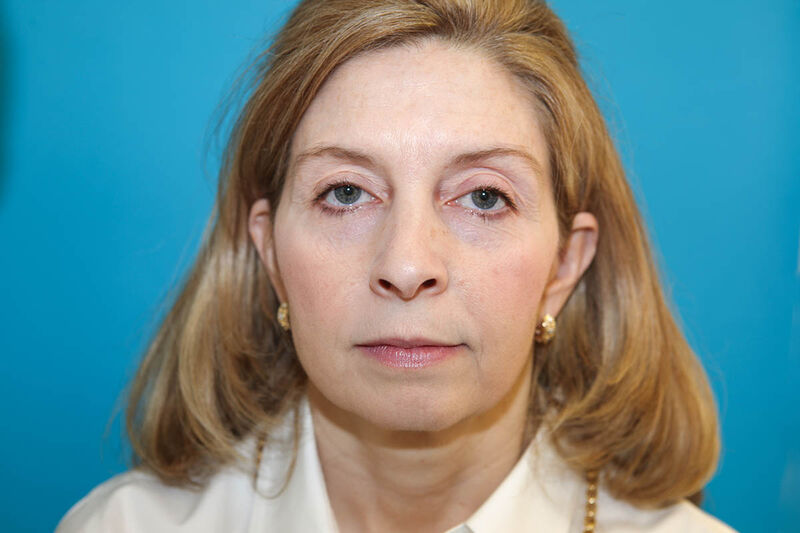 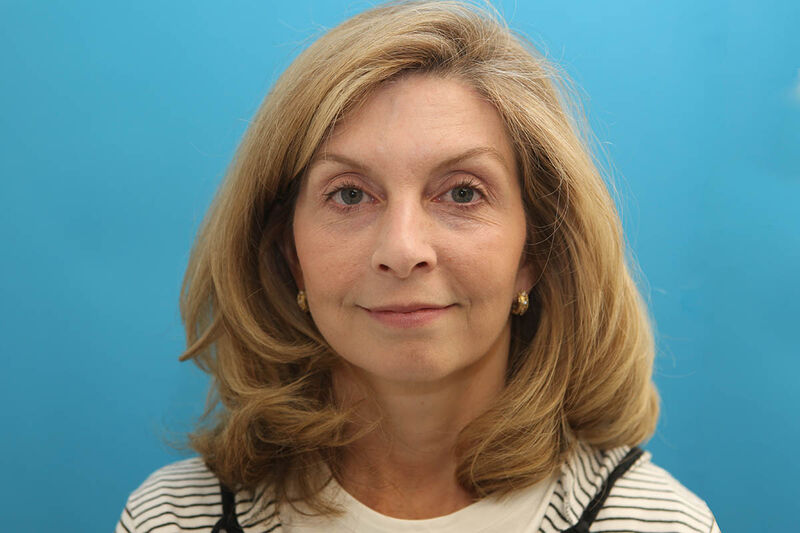 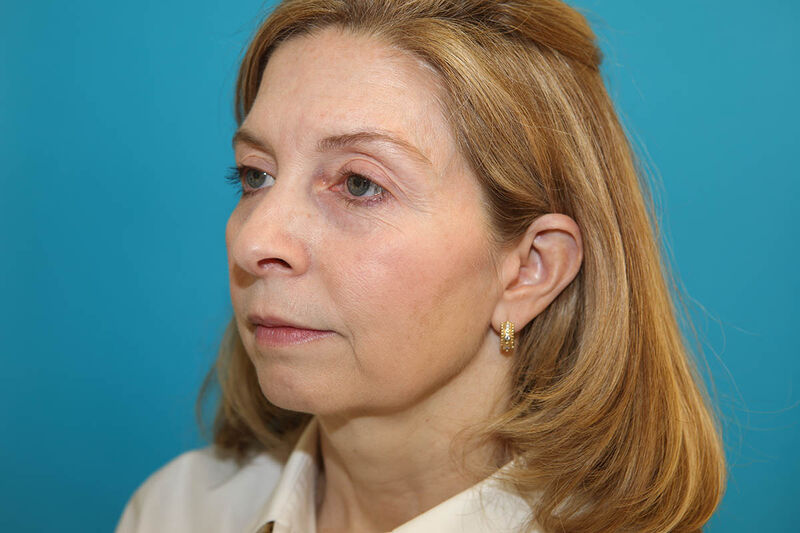 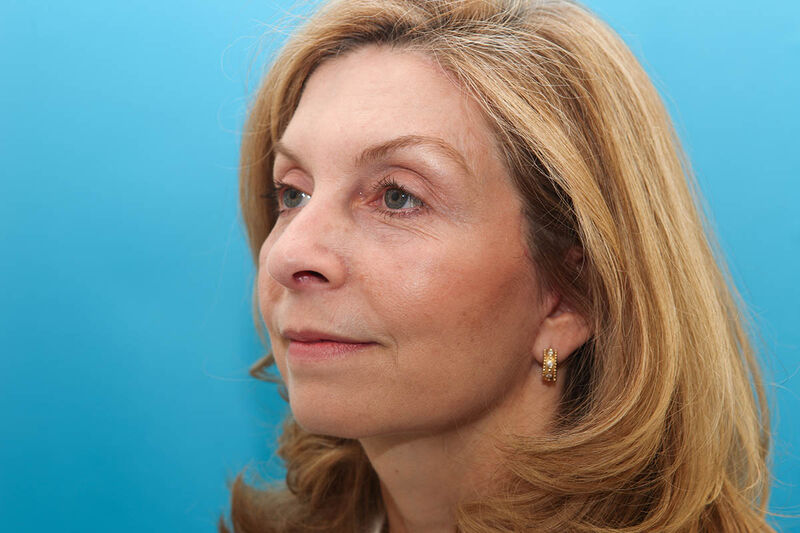 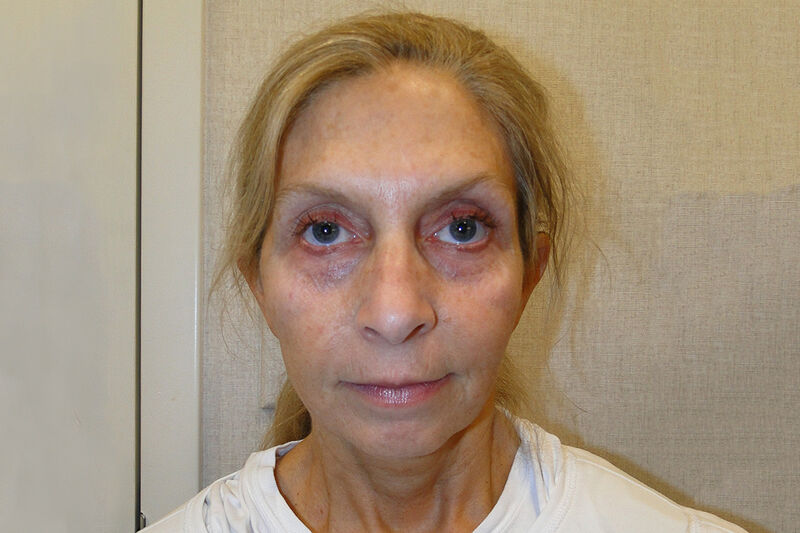 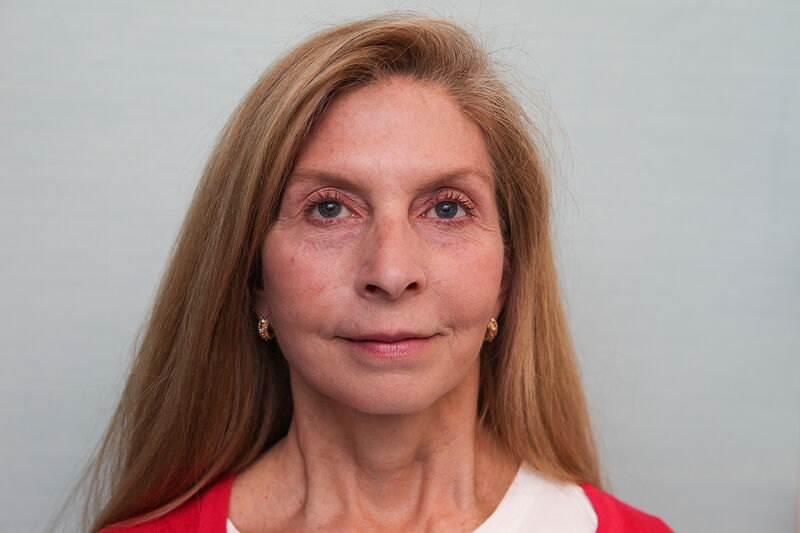 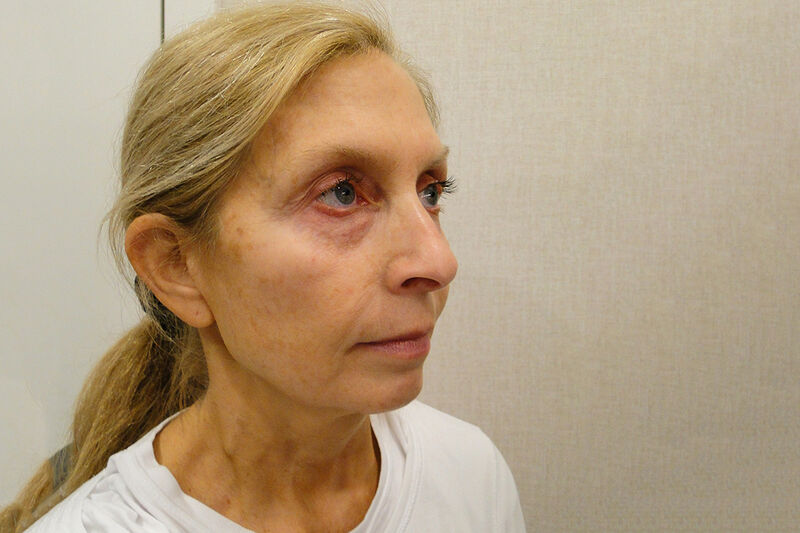 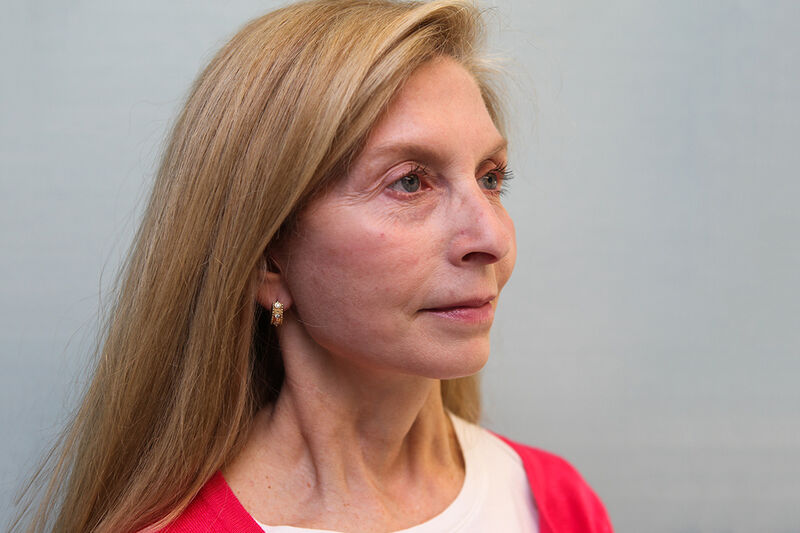 Westport plastic surgeon Dr. Joseph O’Connell has developed and refined his technique, known as the Bidirectional Lift, over the past decade as a better alternative to the traditional facelift. 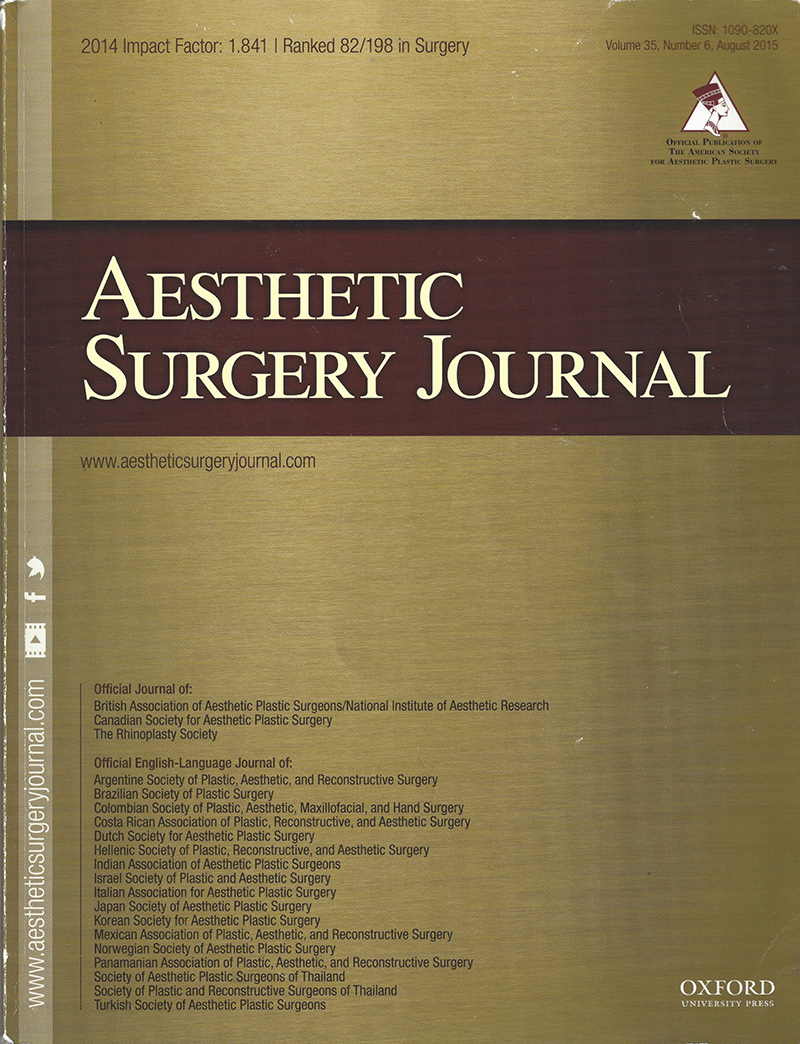 What is the Bidirectional Lift?

The Bidirectional Lift was developed by Dr. Joseph O’Connell over the past decade with two main goals in mind: natural, reproducible results and safety.

The driving force behind the Bidirectional Lift was the advances in both surgical technique and suture technology over the past 20 years, together with Dr. O’Connell’s preference for simpler procedures with less recovery, less risk, and less need for anesthesia.

By gently lifting and folding your facial tissue, the Bidirectional Lift provides an extremely effective vector for jowl elevation and jawline refinement, together with a natural auto-augmentation of the cheek. This combination results in a restoration of the more heart-shaped face of youth. It's all about volumization and the BiDirectional Lift is specifically designed to enhance your own facial volume.

Because the Bidirectional Lift does not utilize knots for SMAS elevation, there’s less risk of infection and no possibility of being able to see or feel a knot following surgery. By working in the superficial plane, the facial structures that descend with age are directly addressed without the need to work below the muscles and the all-important facial nerve. In Dr. O'Connell's opinion, the BiDirectional Lift offers less risk of nerve injury than some other techniques without the need to manage the troublesome temporal circulation.

The Bidirectional Lift is not simply Dr. O'Connell’s proprietary facelift technique; it’s a technique built upon the time-honored work of preceding master plastic surgeons. Most importantly, the Bidirectional Lift has passed the scrutiny of peer-review and was published as the lead article in the prestigious publication, Aesthetic Surgery Journal, in 2015.

As the originator of the Bidirectional lift, Dr. O’Connell is a published author and nationally recognized expert on facial rejuvenation and facelifts.

Can The Bidirectional Lift be combined with other procedures?

Additional facial procedures such as eyelid surgery, brow lifting, liposuction of the neck, and laser resurfacing are commonly part of the plan developed for each individual based upon their particular needs, concerns, and facial anatomy.

The majority of Bidirectional Lift patients continue to maintain and enhance their appearance with intense pulsed light and laser treatments as well as with a comprehensive, individualized medical skincare regimen and Botox and fillers when necessary. 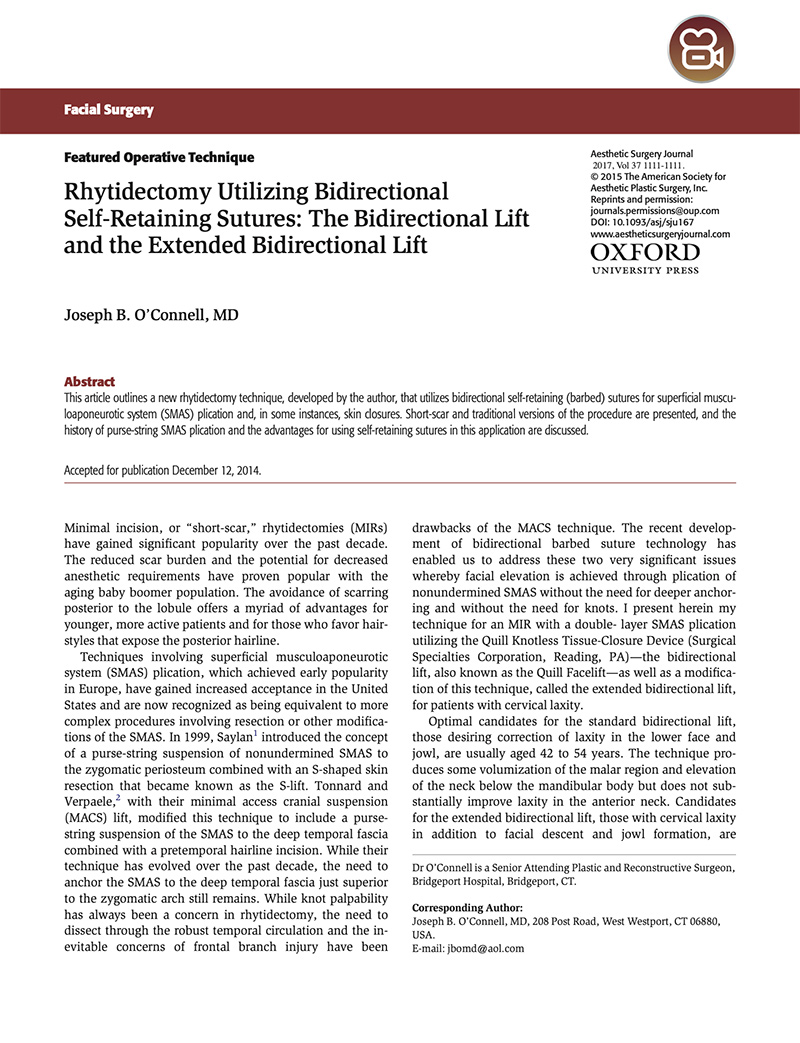 What are the benefits of The Bidirectional Lift?

Because it requires a smaller incision, a Bidirectional Lift poses fewer risks, results in less scarring, and requires a shorter recovery time than a traditional facelift. It also offers longer-lasting results than non-surgical options, such as injections, fillers, Botox, lasers, and radiofrequency procedures.

Because no knots are used to provide the lift, there’s no need to anchor or bury them and therefore no need to dissect deep into the face into the areas of important nerves, muscles, and blood vessels. The Lift is named after the Bidirectional knotless, Quill sutures used, which are slowly absorbed by the body. There’s less inflammation, less swelling, and less risk of infection than with some other techniques.

All surgery leaves scars, but with a standard Bidirectional Lift, the scars are shorter and stop at the base of the ear. The Bidirectional Lift is designed to hide scars in natural creases and to preserve the hair, including the sideburn “tuft.” 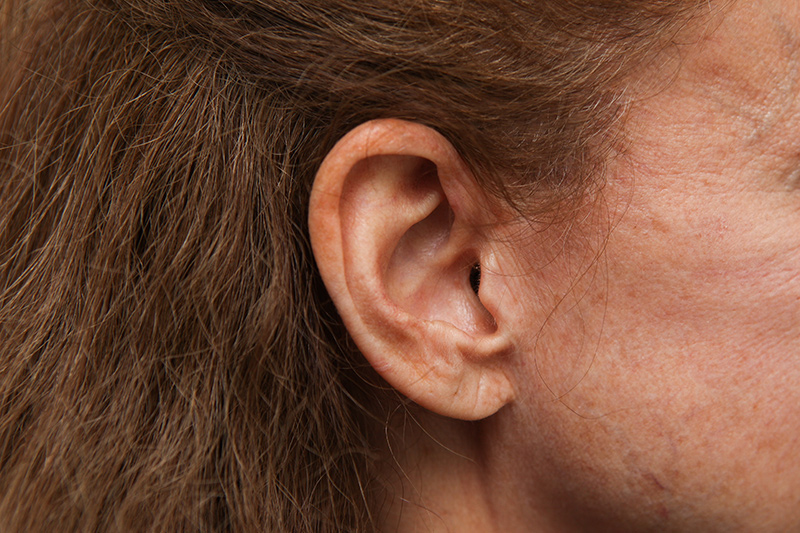 Here is a photo of the scar from a standard BiDirectional Lift at 5 years.

Because a smaller incision is required for a standard Bidirectional Lift and because the procedure is performed in the “superficial plane”, the procedure is less invasive than traditional facelift surgery and significantly less invasive than a deep plane facelift. Bruising and swelling are minimal and our Westport BiDirectional Lift patients are generally able to return to sedentary occupations within ten days or less, and unrestricted physical activity at 21 days.

This postop photo, taken in 2021, was taken 6 weeks after surgery

The Standard Bidirectional Lift can easily be performed in Dr. O’Connell’s accredited in-office surgical suite without the need for general anesthesia or intravenous sedation. You never have to worry about who is administering anesthesia because you won’t be “put under” during the surgery.

For the Extended Bidirectional Lift, intravenous sedation or general anesthesia may still be used, depending on your specific procedure.

The results of a Bidirectional Lift last as long or longer than other facelift techniques, and much longer than Botox or fillers. The secret of the Bidirectional Lift is that it not only lifts the midface and jowl but volumizes the cheek with the patient’s tissue. This gives the appearance of increased natural fullness without the need for fillers or injections.

Am I a candidate for a Bidirectional Lift?

Most Bidirectional Lift patients are between the ages of 45-75.

For younger patients, the Standard Bidirectional Lift provides elevation of the lower and mid-face, jowl, and cheek with essentially no scarring behind the ear. This is a type of “minimal incision” or “short-scar” facelift. While the Standard Lift is a good choice for many older patients, The Extended Bidirectional Lift provides added correction of neck laxity when present but does require scarring behind the ear.

As with any aesthetic surgical procedure, patients must be in good physical and mental health, accept the associated risks as well as the inevitable scarring and asymmetry that can come with the procedure, and have realistic expectations about what a Bidirectional Lift can and cannot accomplish.

“I want to say thank you again for the great job you did on my face. You are amazing and I should say thank you every day. You put a smile on my face even bigger than before and you turned back time about 10 years. You are a master artist.”

What Happens During a Bidirectional Lift?

A Standard Bidirectional Lift is typically done under local anesthesia with some oral tranquilization in the privacy of our accredited outpatient surgical facility in Westport, CT.

With the Extended Bidirectional Lift, IV sedation or general anesthesia can be used at an accredited and licensed hospital or surgicenter.

Following surgery, patients are observed for at least one hour before being discharged with instructions to minimize talking and chewing and to keep the heads elevated. Showering and hair washing are typically allowed at 48 hours and skin sutures are removed 7 days after the procedure for the Standard Lift.

When you schedule your confidential, personalized consultation for your Bidirectional Lift, Westport plastic surgeon Dr. O'Connell will carefully and comprehensively evaluate your unique needs and aesthetic goals. Together, you will determine what options will work best for you to restore a more youthful appearance and provide you with the confidence that comes with putting your best face forward.